Do you need a Paris map? So here is a map of Paris that you can use either in a static or dynamic manner. Further down, you can also access the map of a specific arrondissement of Paris. 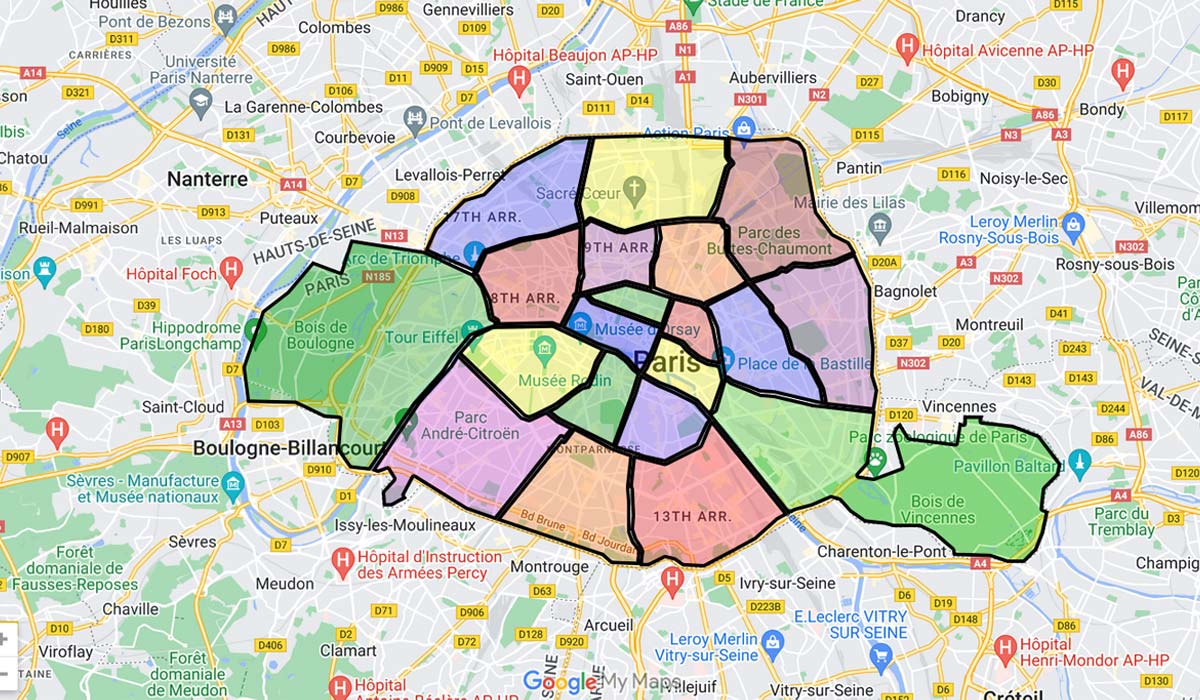 The map of Paris here above is a static one. If you need to use a dynamic and interactive Paris map, feel free to use the following map with zooming and moving possibilities:

Map of Paris with arrondissements

You will see a particular district later? Here is the list of the 20 boroughs. By clicking on one of the links below, you will find a map of Paris centered on the arrondissement or Paris area of your choice, with its monuments, streets and avenues, shops – hotels, restaurants, etc.< /p>

Map of Paris by arrondissement

If you wish to directly access the map of a particular arrondissement, click on the corresponding link below:

Presentation of the arrondissements

This division of the capital of France into arrondissements dates back to the year 1795. Paris then had twelve arrondissements. It was not until 1859 that their number rose to twenty with the annexation of the nearby suburbs. It was also at this time that spiral numbering was adopted, starting from the districts of central Paris to the peripheral districts. Among the municipalities annexed in the 19th century, we can notably cite Grenelle (15th), Vaugirard (15th), La Villette (19th) and Belleville (19th and 20th today). Many other villages could also be cited: Auteuil, Batignolles-Monceau, Belleville, Bercy, Charonne, Grenelle, La Villette, Montmartre, Vaugirard, etc.

Today each district of the capital has its own town hall for its administration, town hall usually located in a beautiful Haussmann building.

Each arrondissement has its own council, whose members are elected during municipal elections. This arrondissement council acts like a municipal council even if it does not have the same prerogatives.

A specificity of the city of Paris is that the first members elected on each electoral list are councilors of Paris, and as such also sit on the Council of Paris. The other elected members are arrondissement councillors, and can only sit on the arrondissement Council.

This website uses cookies to improve your experience while you navigate through the website. Out of these, the cookies that are categorized as necessary are stored on your browser as they are essential for the working of basic functionalities of the website. We also use third-party cookies that help us analyze and understand how you use this website. These cookies will be stored in your browser only with your consent. You also have the option to opt-out of these cookies. But opting out of some of these cookies may affect your browsing experience.
Necessary Toujours activé
Necessary cookies are absolutely essential for the website to function properly. This category only includes cookies that ensures basic functionalities and security features of the website. These cookies do not store any personal information.
Non-necessary
Any cookies that may not be particularly necessary for the website to function and is used specifically to collect user personal data via analytics, ads, other embedded contents are termed as non-necessary cookies. It is mandatory to procure user consent prior to running these cookies on your website.
Enregistrer & appliquer